The leader of the Roman Catholic Church has called free-enterprise capitalism "a new tyranny" and called for new focus on serving the poor. We hear different views on what Pope Francis means about politics, economics and religion...
Pope Francis: God and Money (1:08PM)

The new Roman Catholic Pontiff shared his 77th birthday today with homeless people, one of whom brought his dog inside the Vatican. It was a visual example of Pope Francis' informality and modest lifestyle, in contrast to what he has called the "idolatry of money." In a recent statement he said, "It is vital that government leaders and financial leaders take heed and broaden their horizons, working to ensure that all citizens have dignified work, education and healthcare." This weekend, he denied right-wing accusations that he's a Marxist, while defending his criticism of capitalism and his focus on serving the poor. Is one of the world's most influential leaders pitting his church against the free market? Is he inserting religion into the realm of politics, or emphasizing the teachings of Jesus Christ, who warned against trying to serve both God and money?

[Maura Larkins' comment: Mr. Muller looks like Albert Einstein, but he doesn't sound like Albert Einstein. Mr. Muller impressed me with his refusal to admit that unfettered capitalism was responsible for the global financial crisis. What are they teaching at Catholic University of America? How to ignore reality as one goes about accumulating wealth and power? I got the impression that Mr. Muller believes that Jesus would be an investment banker if he lived today, and would feel no guilt about the worldwide financial devastation caused by greed.]


Chris Lowney: Author of Pope Francis: Why He Leads the Way He Leads; one-time Jesuit seminarian who later worked as a managing director at the banking firm of JP Morgan
First Theme of Heroic Leadership: Self Awareness 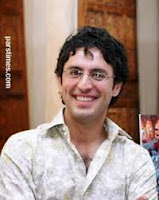 Reza Aslan: University of California, Riverside, Professor of Creative Writing at the University of California-Riverside, founder of Aslan Media and member of the Council on Foreign Relations author of How to Win a Cosmic War: God, Globalization, and the End of the War on Terror, Tablet & Pen: Literary Landscapes from the Modern Middle East, No god but God: The Origins, Evolution, and Future of Islam (revised, updated edition for the tenth anniversary of 9/11) and Zealot: The Life and Times of Jesus of Nazareth; former contributing editor at the Daily Beast and Middle East analyst for public radio's Marketplace
http://en.wikipedia.org/wiki/Reza_Aslan